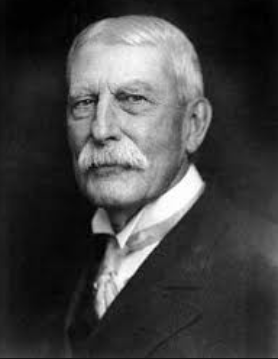 Most of us locals have heard the name before, and we definitely know Flagler Drive, Flagler Bridge, Flagler Museum, and Flagler College in St. Augustine. But who was Henry Flagler? Read below to learn more about the “inventor” of Florida.

Henry Morrison Flagler is best known for his development of Florida’s east coast. He was responsible for building the Florida East Coast Railway from Daytona to Key West. Flagler made a significant contribution to Florida’s economy through tourism and agriculture.

From grains to oil and beyond

Flagler had some success in the grain business. Then he joined John D. Rockefeller to found Standard Oil in 1870. In two years, Standard Oil was leading the U.S. oil industry.

Flagler, his wife, and children lived in New York but his wife’s health was not good. The doctor suggested they try Florida. The Flagler family tried wintering in Jacksonville, then the only accessible city in the state.

On Flagler’s second trip to Florida in 1882, he visited St. Augustine. He was charmed by the city and the weather but frustrated by the lack of hotels and transportation. He recognized Florida’s potential to attract out-of-state visitors. He decided to pour his oil fortune into the state’s development.

In 1885, he began construction on the 540-room Hotel Ponce de Leon hotel in St. Augustine. Realizing the need for transportation to his hotel ventures, Flagler began purchasing existing railroads. This was the start of Flagler’s railroad system.

Two years later, Flagler built a railroad bridge across the St. Johns River to gain access to the southern half of the state and purchased a hotel, just north of Daytona. He next extended his railroad and hotel empire to Palm Beach. Flagler’s hotels and railroad established Palm Beach as a winter resort for the wealthy members of American society. Flagler built a palace, called Whitehall, as his residence in Palm Beach.

Henry Flagler intended his next expansion, West Palm Beach, to be the end of his railroad system, but during 1894 and 1895, severe freezes hit the area. Legend says that landowner Julia Tuttle, a young widow who lived in Miami and advocated development, sent Flagler a spray of orange blossoms—proof that the freeze had left southern Florida untouched—an incentive to extend his railroad to Miami. To further convince him to continue the railroad to Miami, Flagler was offered land in exchange for laying tracks.

Flagler’s railroad, now named the Florida East Coast Railway, reached Biscayne Bay by 1896. Flagler dredged a channel, built streets, instituted the first water and power systems, and funded the town’s first newspaper. When the town incorporated, its citizens wanted to honor the man responsible for its development by naming it “Flagler.” He turned down the honor. He persuaded them to keep the old Indian name, “Mayaimi.”

A failed bridge with good intentions

In 1905, he began constructing what would be called, “Flagler’s Folly,” a railroad that would span seven miles of open water on its way to Key West. At the time, Key West was Florida’s most populated city. It was also the port nearest to the canal that the U.S. proposed to build in Panama. Flagler wanted to trade with Cuba and Latin America as well as take advantage of increased trade with the west using the Panama Canal.

Almost 4,000 men built the railroad bridge in seven years. They had to contend with mosquitoes, sand flies, and hurricanes. Hundreds of workers died in the storms. The railroad was finished but it proved to be a failure. It never earned the expected money and was destroyed by a 1935 Labor Day hurricane.

Flagler died a self-made millionaire in 1913 in West Palm Beach Florida. Today, Whitehall, Flagler’s Gilded Age estate in Palm Beach is a national historic landmark and is open to the public as the Flagler Museum

Flagler said, “I have always been contented, but I have never been satisfied.” When he began his development on the east coast of Florida, it was largely an uninhabited frontier. Due to his vision and persistence, his accomplishments can still be seen. His dissatisfaction has left a legacy for those of us who followed.

For assistance in purchasing or selling a home in Florida from Palm Beach to Jupiter Island, contact a Tauber Realty Services specialist at 561-623-5480.