At a time when natural areas along south Florida’s coast are almost nonexistent, John D. MacArthur Beach State Park stands out as an “island in time.”  It preserves the natural heritage of subtropical coastal habitat that once covered southeast Florida.

Nestled on an Atlantic Ocean front barrier island, John D. MacArthur Beach State Park is an environmental treasure which has been preserved for present and future generations to discover and experience. Amenities include a Boardwalk, beach tram service, playground, picnic areas, snorkeling, nature center, nature trails, kayak center where you can rent kayaks. Check out the park’s rich history and natural communities:

John D. MacArthur Beach State Park was established in 1989, the only state park in Palm Beach County. The purpose was and is still today, to protect a very rare and spectacularly beautiful piece of Florida’s southeast coast.  John D. MacArthur realized this after a university study in the 1970’s revealed the biological treasures in this area.

Situated between the Atlantic Ocean and the Lake Worth Lagoon, the Park is 438 acres of natural environments, including seven species of plants and twenty-two species of animals designated as endangered or threatened.

Walk the Dune Hammock Trail and the Satinwood Trail Hammock is an Indian word that means “shady place”. The maritime hammock includes a thin, intermittent strip of vegetation behind the beach dune and a mature hammock between A-1-A and Lake Worth Cove. The main portion of the hammock includes many large tropical trees like strangler fig and mastic, and some temperate ones like live oak. There are also satinleaf trees, a small fresh water depression with pond apple and a few scattered remnant slash pines. The hammock also contains numerous species of invasive exotic plants, with Brazilian pepper being the biggest threat. 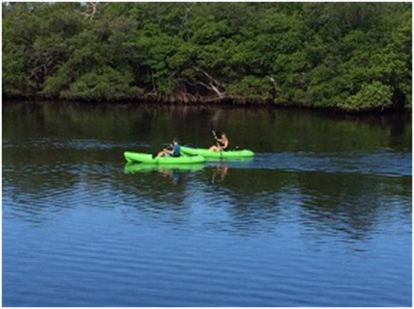 In the early 1900’s, Munyon Island was famous for its lavish resort hotel, “The Hygeia.” Built by Dr, James Munyon, the hotel was destroyed by fire in 1915. Munyon Island is accessible by boat only.

The Island was originally called Nuctsachoo by the Seminoles, which means Pelican Island and it reportedly supported one of the largest wading bird rookeries in South Florida.

Kayakers frequent the shallow estuary around Munyon Island. Wildlife on and around Munyon Island includes blue sea grass, Great Blue Heron, and Little Blue Heron. The waters contain mojarras, sardines, mullet, pinfish, and snapper.  Kayaks are available for rent at Beach Outfitters Gift Shop & Kayak Rental on site at the park. The island, which is only accessible by boat, has no bathrooms, but it does have covered picnic areas and grills.

For boaters, a long awaited boat docking facility on Munyon Island opened in November, 2010.  The day-use only facility will accommodate up to 20 boats and provides easy access to the island’s nature trails and picnic pavilions.

The estuary at John D. MacArthur Beach State Park is a small cove off the northern portion of Lake Worth. The water in the estuary is a mixture of salt and fresh water. Conditions in this community are always changing. Water levels rise and fall with the tide. The water temperature changes, as does the salinity. Organisms that can survive the variable conditions of an estuary flourish in the nutrient-rich waters. Some of the inhabitants of this system include oysters, fiddler crabs, mullet, checkered puffers and manatees.

The beach and dunes of barrier islands protect the mainland by absorbing the energy of the ocean waves. Sand dunes and beaches are in constant motion always moving with the wave energy. Generally, sand travels along the east coast of the United States from north to south, so the sand you see today on the beach is not the same sand you see tomorrow.

Plants that grow on the dunes usually have thick, waxy or fuzzy leaves to protect themselves from heat, salt, blowing sand and drying winds.

This community was formed more than 125,000 years ago. The reef is limestone as opposed to those made of coral reefs found mostly south of the park. Many species of marine animals inhabit the reef. Some of the more spectacular are parrotfish, barracuda, damsel fish and loggerhead sea turtles. The reef stretches along the 1.6 miles of beach within the park’s boundary. Unlike many coral reefs in the Florida Keys, the reef is visible from the shoreline and can be easily reached with a mask and snorkel.

See you at the park! For more information on the Finest Homes in the Palm Beaches, contact a Tauber Real Estate specialist at 561-626-4633.