There's nothing better than a cold beer at a baseball game! 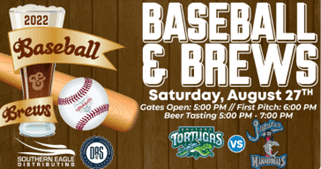 Roger Dean Chevrolet Stadium in Jupiter invites you to enjoy over 50 regional and national beers as the Jupiter Hammerheads host the Daytona Tortugas on Saturday, August 27th! Tickets include a two-hour beer tasting, a souvenir tasting mug, and a ticket to the game! Read on for more information about the stadium:

2022 marks the 25th season that Roger Dean Chevrolet Stadium has been home to professional baseball, and its fans have much to celebrate about their favorite ballpark.

Since opening in 1998, Roger Dean — named after the legendary local car dealer — has been the Spring Training home of three clubs: the Montreal Expos and, currently, the Miami Marlins and St. Louis Cardinals. Now, it’s also the only stadium that hosts four minor league teams: the Jupiter Hammerheads and Palm Beach Cardinals of the Florida State League, and the FCL Marlins and FCL Coast Cardinals of the Rookie-level Florida Complex League. Just like in years past, it’s the place to catch up-and-coming talent before they become megastars, all summer long. 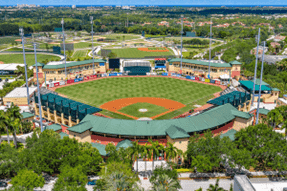 The Roger Dean Chevrolet Stadium complex is the only stadium in the country to host four minor league teams:

The teams share the main stadium where the games are played. However, the teams have their own practice fields, outdoor batting cages, several pitching mounds, and state-of-the-art conditioning rooms.

In September 2012, the stadium hosted the qualifying round for the 2013 World Baseball Classic. Spain, France, Israel, and South Africa took part in the qualifier.

The Jupiter Hammerheads are the Class-A Advanced affiliate of the Miami Marlins. The Hammerheads play April-September at Roger Dean Chevrolet Stadium in Jupiter, Florida.

Another Upcoming Event at the Ballpark

After Baseball and Brews, mark your calendar for September 9-10, Before the stadium and players slide into the offseason, Roger Dean Chevrolet Stadium invites you to join other baseball fans and families for Inflatapalooza! This two-day event features multiple inflatable activities. Perfect for families and kids of all ages.

See you at Roger Dean Chevrolet Stadium for Baseball and Brews! For more information on the finest homes in the Palm Beaches, contact a Tauber Real Estate Services specialist today at 561-626-4633.